Walking with the Best – Rory McIlroy and Erik Compton

Walking with the Best – Rory McIlroy and Erik Compton

It is amazing what you learn about a person just by playing 9 or 18-holes of golf with someone.  What is their belief system?  Do they provide good character and moral value practices for youth and adults to copy? Can I trust this person? Those are only a few of the things you will learn about someone, just by playing golf.

I had the unique opportunity to walk 18-holes last week with two of the world’s elite players, both arguably the best in the business.  But better than being the best at what they do, I was thoroughly impressed with who they are as people first.  I learned a lot that day about two unique individuals.  Rory McIlroy and Erik Compton are not only two of the best golfers on the planet, but they are genuine people we can all take stock in as role models for both our children and ourselves.

Walking with the Best Round 1 – Rory McIlroy 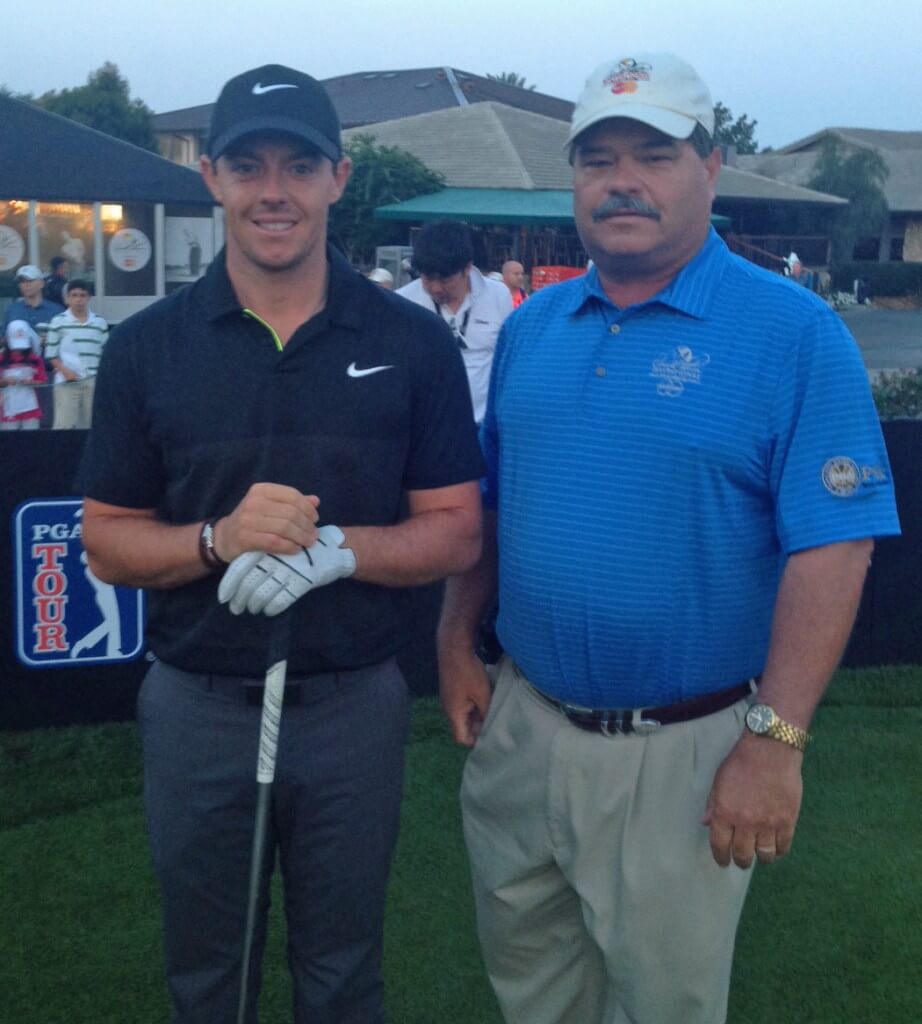 The day started early at 7:30AM on the 10th Tee at Bay Hill Club and Lodge, Pro-Am Day for the Arnold Palmer Invitational sponsored by MasterCard.  I first met all the Amateur Partners and their Caddies I would be assisting that day, each of these individuals highly successful in life and in business.  As I was shaking the last hand, Rory McIlroy made his entrance.  Rory made it a point to personally introduce himself to the group without someone else formally introducing him first, which is typically the custom.  With him was his Caddie, JP Fitzgerald and his long time Coach, Michael Bannon, who both also stepped forward to say hello to all before someone else could do that for them.  I have been around these events since 1988 and this was the first time I experienced the Tour Professional and his entourage taking the lead to offer a genuine sign of warmth and appreciation in a similar setting.

Rory’s McIlroy’s Amateur Partners had obvious 1st Tee jitters well into the first few holes, trying to stay out of the way of the World’s #1 Male Golfer as he circumnavigated Bay Hill for the very first time in his career.  It took a few holes for their golf performances to level out, but it did not take long for Rory to recognize their nerves and make a point to establish a personal connection with each Player on the very first hole of play.  In between the conversations, Rory was all business, planning each hole with JP, practicing chips and putts to potential hole locations, measuring distances from landmarks, and doing the things necessary to insure he would be a threat come Sunday.  Michael offered assistance every step of the way and reminded Rory of the skills they are working to master.  The precise discipline and thoroughness of preparation by Team Rory was impressive to say the least.

2 or 3 times throughout the round, both JP and Michael shared some general conversation with me about Rory.  I was most interested in Rory’s preparation to earn his career Grand Slam this April, which Michael assured me was well on track.  It was not until the middle of the fairway on #1 that Rory engaged me, saying thanks for walking along and assisting his team.  I acknowledged his compliment and told him that being a Father of a 12-year old Son, I was more thankful for him being who he was as a person, more so than a golfer.  Some players take on their roles as potential role models as a secondary mission.  It was obvious to me by observing his genuine actions, that Rory takes this part of his professional responsibilities very seriously, equally as important as his playing performance.  With his eyes a bit wider than before he provided his hand to me, Rory said,  “Thank You, that means a lot to me.” 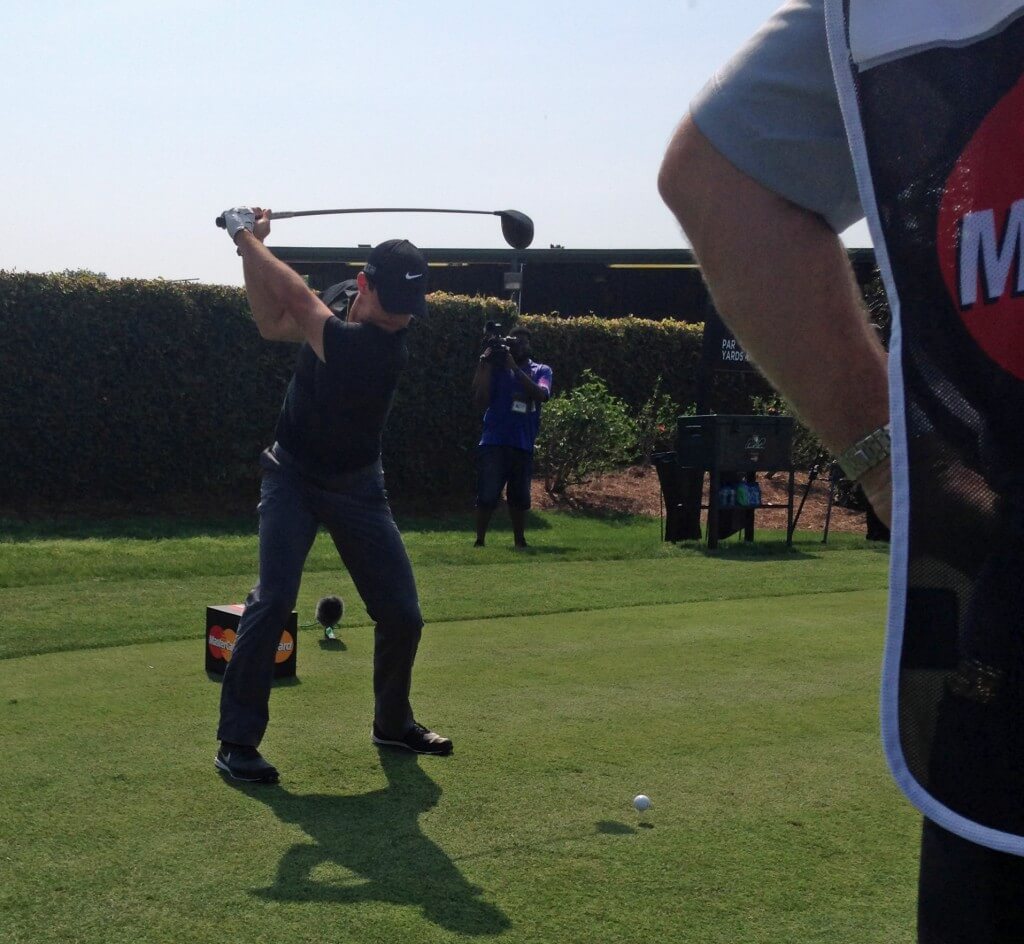 Rory and I shared some more conversations about his Augusta preparation as well as other subjects.  Rory’s answers were candid, honest, and shed some light into his persona.  During the round he fulfilled as many autograph requests and photo opps as he could without holding up play, telling those he could not satisfy to see him after the round on the 9th green.  When we completed the round, Rory stayed just off the 9th green for over 30-minutes, satisfying as many admirers as he could, making eye to eye contact with each person.

Rory McIlroy is for real.  He has earned his place in golf history by his performance, but more importantly has earned our respect.  Each person in the group that morning walked away from our experience with Rory knowing we had shared time with a real person.

Walking with the Best Round 2 – Erik Compton 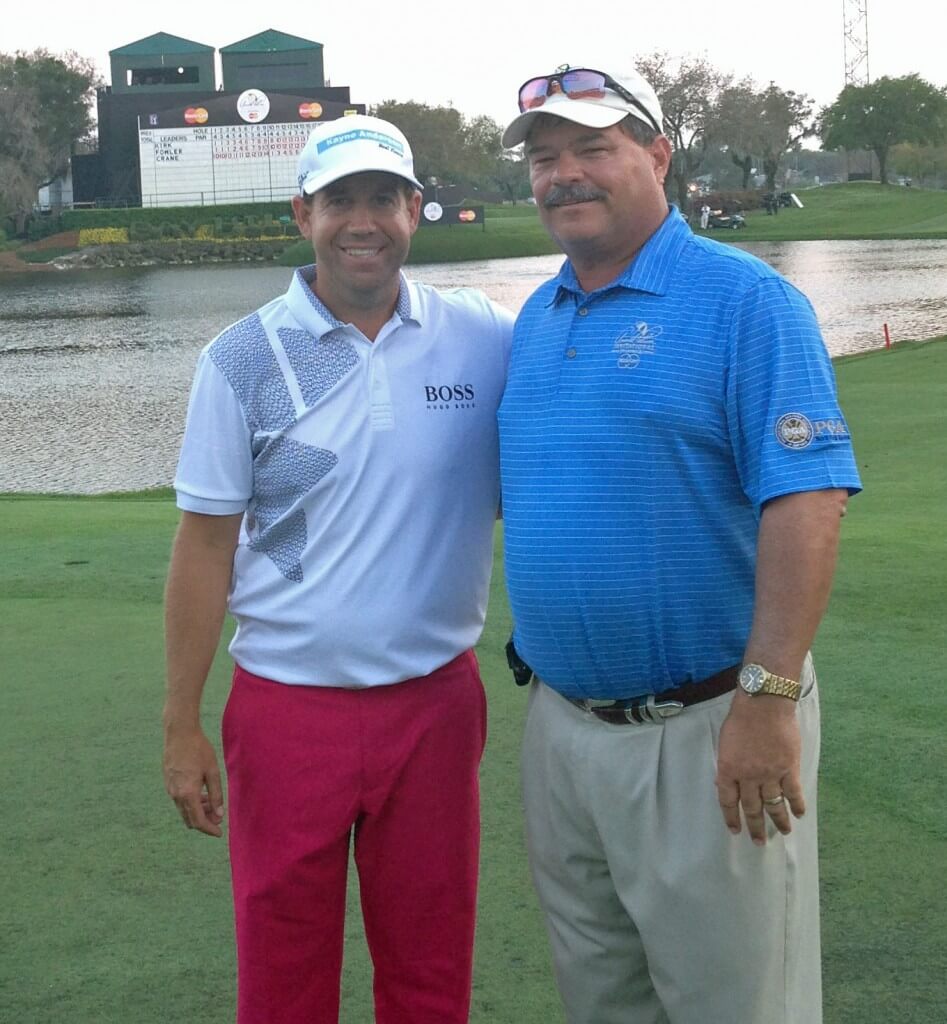 After a brief lunch and rest, 2:20PM came all too quickly.  Waiting on the 1st Tee for Erik Compton were two gentleman from Japan, only one of which could understand the English language well enough to carry on a conversation.  There was also a retired 2-Star Army General who was making his 47th start in a PGA, LPGA, or Champions Tour Pro-AM event in the past 3+ years.  It was obvious from the opening tee shots that this group was jittery but could also play some golf, with each owning a single digit handicap.

We all know Erik Compton from the countless media pieces documenting the health issues he has experienced throughout his life, as well as his gutty performance in last year’s US Open where he tied for 2nd.  From the outset of the round, walking with Erik was to the beat of a different drummer, but had all the makings of a fun-filled afternoon.  Victor Billskoog, Erik’s Caddie set the tone early with various one liners and antidotes that kept the group laughing.  And Erik piped in from time to time with a couple self-deprecating comments about his performance the past few weeks.  Erik immediately took the time to ask questions of all his playing partners, encouraging them throughout the round when their shots were not what they expected, or lending some timely advice along the way.  Erik’s Father, Peter, joined us on the 7th hole and quickly fit right in to the group in his own way, allowing the group to enjoy their time with Erik.

What was most impressive about Erik Compton was not only his disciplined approach to his preparation and craft, but his shear determination.  Having played Bay Hill more than 50+ times throughout his career, Erik recognized that this tournament was a turning point for his season.  He had not made a cut in recent weeks and to me it was obvious making the cut at Arnie’s place was important to him for that particular moment in time as well as to gain back some momentum leading into this year’s majors.  Every shot Erik took, whether for the team score or as a practice stroke, was with an absolute cause.  Going through a dry spell on the PGA Tour is agonizing.  But I believe Erik used his experience gained from his stellar youth and collegiate careers in a healthy way that day, to realize he is a force to be reckoned with for a long time to come on the PGA Tour.  His determination was evident after receiving a message mid-way through the round that a close friend had just passed away.  The news visible took Erik by surprise and had to weigh on his mind as he went about his business that day and through the entire tournament.

I had a few opportunities to speak to Erik throughout the round about his preparation, his game, and his goals.  I also wanted to know from him how he was preparing for the fist major of the year.  There was a realism to Erik’s demeanor as we spoke throughout the day, a realism about who he is as a golfer, but more importantly about how he feels about himself as a father, husband, and role model.  I found out last year from some friends on Tour that Erik’s outlook about his game made a sweeping turn for the better after his performance at Pinehurst, allowing him more comfort within his own skin, within all aspects of his life.  It was ever obvious to me and all the group that Erik Compton lives life one day at a time, for all the right reasons, and keeps his life priorities in perspective when it comes to making decisions.  If you only judge Erik by the story of his health issues, he is an inspiration.  But he backs that up with real life grit and determination while keeping in perspective that he is who he is, and can make a positive impact one person at a time.  I informed Erik that I was very impressed with him as a person and as a golfer and thanked him for being a great person we can all feel good about following.  Erik smiled and thanked me for recognizing in him traits we can all admire.

Throughout the day, Erik Compton was the epitome of a gentleman, granting every photo opportunity and autograph chance by the gallery.  The “General” convinced Erik to place a friendly wager against him on the Back 9, with the other two playing partners asking the same.  The banter between Pro and Amateur that round was reminiscent of what you experience each weekend with your favorite foursome.  By time we came to the 18th hole,  everyone had learned a new cultural language, as well as learned the language of comaradery.  Everyone paid their bets owed to Erik to the newly formed Erik Compton Foundation, which specializes in the education and research of organ donation and youth development.  Each of us had our special moment with Erik on the 18th with many great photos taken that we all will proudly display. 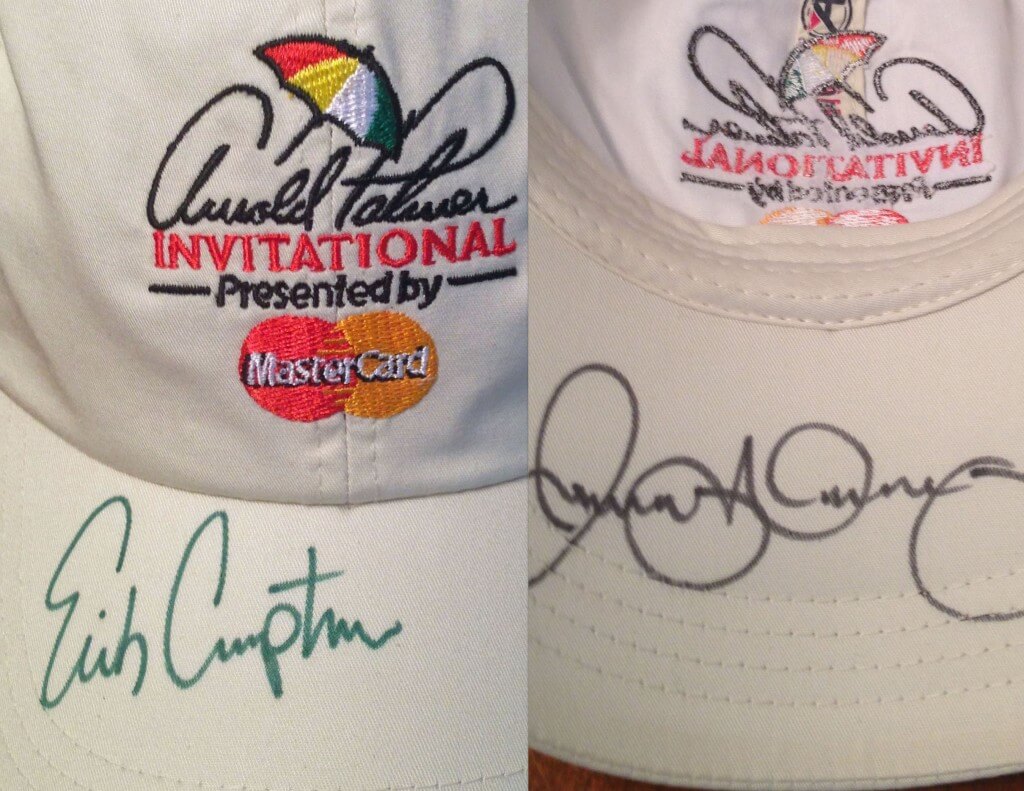 The Signatures of 2 Champions of Life on 1 Hat.

Walking with the Best – What it Means to You and Me

When we talk about role models, it is easy to find celebrities anywhere that receive the most publicity, seek the most attention, or demonstrate within their craft that they are very good at what they do.  But we as a society should seek out those individuals as role models that truly fit YOUR vision and mission of life.  I have played many rounds of golf with many people and can honestly say I have found most of the people I have shared those rounds with as someone I’d feel comfortable inviting to Sunday dinner, regardless of their skill level or publicity quotient.

Thank You Rory McIlroy! And Thank You Erik Compton! Thank you both for a day when I experienced two class individuals going about their business while realizing their true roles as human beings.  I know you both were not totally satisfied with your final place on the final Leaderboard this past weekend.  But I hope you both feel rewarded by the solid impacts you made on the golf balls you hit and the people you touched throughout the week.  I wish you both the best of luck in life and on the course.  And I hope we will again cross paths somewhere down the road of life soon.