Is Your Pre-Shot Routine, Routine? 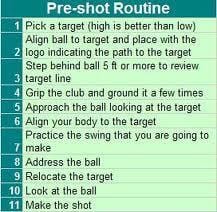 Most likely, you’re undervaluing your Pre-Shot Routine.  It’s the most over looked and under taught aspect of most all golfers’ games. It is the only part of your game that transcends to both the golf course and the practice facility. Yet most everyone short circuits their ability and potential by not placing any value on this aspect of your golf game.  A great Pre-Shot Routine brings together all the elements of your game; physical, mental, emotional, and results, into one simple process. If perform your Pre-Shot Routine before every shot, chances are it could lead to instant improvement in your scores.

I recently had the opportunity to coach a Vice President from an S&P 500 company who stated within his Player Profile that he wanted to have his Pre-Shot Routine reviewed during his golf school.  One of his comments was “he did not know if he had a routine or not.” What an amazing statement from a highly successful individual. As much as he described his professional and personal life to me during our time together, and the routines he has established to be as successful as he is, he never thought about putting much value into his Pre-Shot Routine. By the end of his three days with me, he not only had a Pre-Shot Routine he can count on, he understands what his routine includes and knows how to implement his routine to effectively become a successful golfer.

The easiest way for you to understand what a Pre-Shot Routine includes and how to use one to your advantage is to think of your routine as a phone number. In late 1940’s, Bell Labs spent millions researching how to create more telephone numbers that could easily be remembered to serve the growing number of households in our country. Their research concluded that a person can remember a series of three numbers better than any other. Second was a series of four numbers. If you can remember your phone number, you can implement a Pre-Shot Routine that is easy to remember that will serve you for years.

First, you have to remember that a phone number is always the same, repeating numbers in the same sequence. Your Pre-Shot Routine should do the same, repeat itself in the same sequence, no matter what shot you have. And it should include no more than 3 or 4 major elements that you are capable of repeating each and every shot. This provides a foundational base you can depend upon for each shot. If your Pre-Shot Routine starts with making a practice swing, then standing behind your ball to align with your target, then placing the club behind the ball before placing your feet into position (this is what most great players do); you have to repeat the same process with each shot. Not repeating your phone number in the same sequence leads to you dialing a wrong number.

Third, should you have variables to contend with as you evaluate a shot, these variables will be much easier to identify and adjust for within your Pre-Shot Routine. Uphill lies, balls that are smothered by rough, awkward stances are more easily adapted to, using your Pre-Shot Routine as a basis to plan for the adjustments. Not repeating your phone number in the same sequence leads to you dialing a wrong number.

Not repeating your Pre-Shot Routine in the same order will limit your ability to perform at your best, sometimes resulting in an outcome you were not counting on. If you need help with this or any other part of your golf game, contact me. I can provide you more information about this and other aspects of the game that will ultimately lead to you playing better golf.